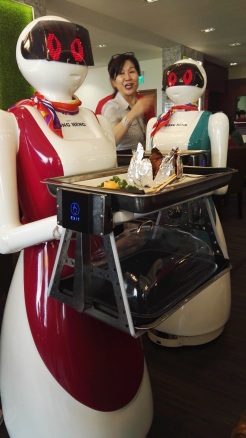 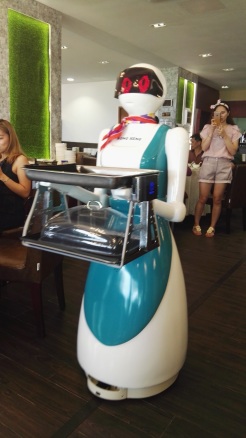 I love robots! And I follow the current debate about what types of robots will be developed, and what kinds of jobs robots will be designed for. In the last year, there have been several articles about robots working in hotels, especially in the Henn na or “Weird” hotel in Japan and also robots working as waiters in both China and Singapore.

East Coast Park is a favourite spot to come and eat at. Several other seafood restaurants are competing for business. We had a booked a table for the early evening and arrived a little before some tourist groups who had obviously come here for the same reason as us!

You can spot the restaurant easily because there is a red static robot marking the entrance.

Once inside you quickly become transfixed watching the two robots circle around the restaurant floor. Kids and adults alike were following them around taking photos and posing with them.

The robots brought the food to the table. All other aspects of the restaurant service were handled by the human staff.

The kids loved the robots and also spent a lot of time playing with the Virtual Reality headset that was also available.

When our food was brought to the table, many other people came over to take photographs, so if you do go to eat here then you need to accept that the novelty factor will play a role in your overall experience!

The food was good, and I would eat there again so if the novelty of being served by robot waiters appeals to you then this is worth a spot on your itinerary.

This site uses Akismet to reduce spam. Learn how your comment data is processed.